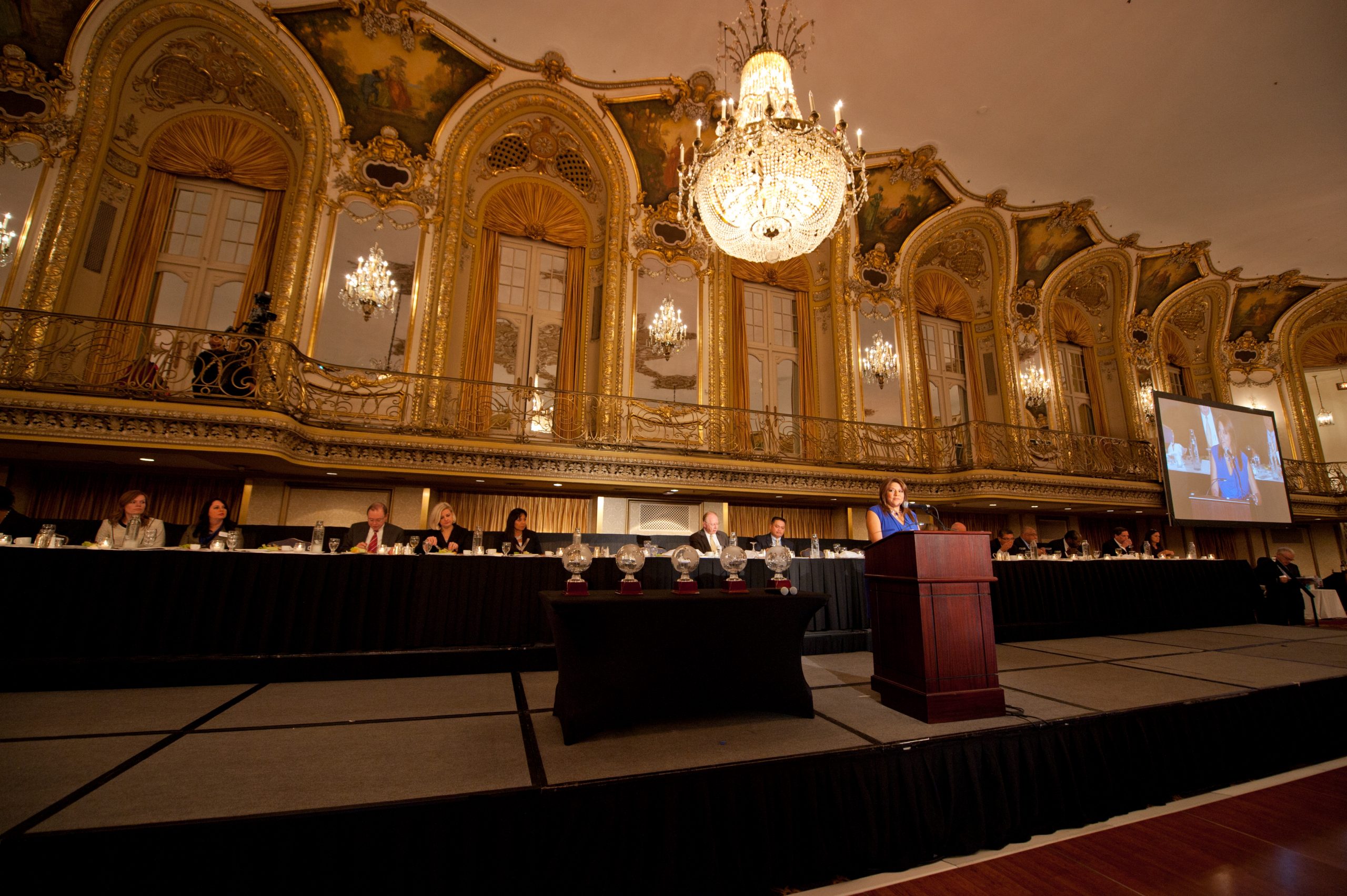 CHICAGO, Illinois – The presidents of more than 50 local and regional Illinois bar groups will meet for a symbolic swearing-in ceremony to affirm and celebrate the Illinois legal community’s commitment to diversity at the Eighth Annual Unity Award Dinner, held on Thursday, October 7, 2010, in the Grand Ballroom of the Palmer House Hilton at 17 E. Monroe Street.

2010 Unity Award Dinner, “Embracing Diversity and Leading by Example,” is presented by the Diversity Scholarship Foundation, NFP, and co-hosted by the Filipino American Bar Association and The John Marshall Law School, and will bring together officers and attorney-members of participating bar associations, members of the judiciary, and deans and faculty members of Chicago-area law schools. Proceeds from the event will benefit the Diversity Scholarship Foundation, which fosters diversity in the legal profession by presenting programs that discuss issues relative to minority lawyers in law firms and corporations and to minority judges.

“This unique event unites leaders of the legal profession who are unwavering in their commitment to making the Chicago legal community the most diverse in the country,” said Jessica A. O’Brien, co-chair of the event’s planning committee and special assistant attorney general at the Illinois Department of Revenue. Co-chairs include Jerold S. Solovy, chairman emeritus of Jenner & Block LLP, board member of the Diversity Scholarship Foundation, and last year’s Unity Award Honoree; Angela F. Williams, senior vice president and general counsel of the YMCA; and Robert A. Clifford, principal partner of Clifford Law Offices.

The Unity Award Dinner will honor Dan K. Webb, chairman of Winston & Strawn LLP, with the 2010 Unity Award. The 2010 Advocate for Diversity Award will be presented to Judge Rueben Castillo, of the Northern District Court of Illinois, and Sandra S. Yamate, CEO of the Institute for Inclusion in the Legal Profession and founder of Polychrome Publishing Corporation. Please see below for biographies of the honorees.

“Dan Webb, Judge Castillo, and Sandra Yamate have demonstrated an exemplary commitment to diversity, justice, and civil rights throughout their careers,” said O’Brien, who is also president of the Diversity Scholarship Foundation. “We are pleased to recognize their groundbreaking accomplishments at this year’s Unity Award Dinner.”

Bar presidents will be sworn in by Illinois Supreme Court Justice Charles E. Freeman, and veteran journalist and national media personality Bill Kurtis will serve as the master of ceremonies for the second year in a row.

Proceeds of the event benefit the Diversity Scholarship Foundation, a not-for-profit organization established by judges and lawyers dedicated to the diversity of law school student bodies and the legal community, whose mission it is to provide scholarships, grants, and/or loans so that underprivileged and under-represented minorities be able to attend law school.

In addition, the foundation supports and presents diversity programs, including an upcoming panel discussion titled, “Women in Politics,” scheduled for Thursday, October 21, 2010, at the Hotel Allegro in Chicago, and other programs on the works are entitled, “Women CEOs,” “Women Managing Partners,” and “Women in the Judiciary.” This year, the Diversity Scholarship Foundation will also award grants and scholarships to foundations, organizations, and institutions that award scholarships to diverse law students.

Biographies of the Honorees

Dan K. Webb is a litigation partner at Winston & Strawn LLP, where he serves as firm chairman and is a member of the executive committee. His litigation practice concentrates in the areas of major commercial, civil, regulatory, and white-collar criminal cases. Mr. Webb has tried more than 100 jury cases, including numerous successful commercial and white-collar criminal trials. Over the years, he has tried numerous complex commercial cases, representing large corporations in jury trials lasting two months or longer. Mr. Webb joined Winston & Strawn in 1985 as a partner, after serving as the U.S. Attorney for the Northern District of Illinois. For all of his achievements as a trial lawyer, Mr. Webb has received many bar and community service honors and awards. Most recently, he was a 2010 recipient of the Inns of Court Professionalism Award. The award, given annually on a federal circuit basis, recognizes a lawyer or judge “whose life and practice display sterling character and unquestioned integrity, coupled with ongoing dedication to the highest standards of the legal profession and the rule of law.” Dan Webb’s complete bio is available here.

Judge Ruben Castillo has served as a district judge for the Northern District of Illinois since 1994. From 1991–1994, he was a partner in the Chicago office of Kirkland & Ellis LLP and was the regional counsel for the Mexican American Legal Defense and Educational Fund from 1988–1991. Judge Castillo served as an assistant U.S. attorney for the Northern District of Illinois from 1984–1988 and was previously with the firm Jenner & Block LLP. He is an adjunct professor of trial advocacy at Northwestern University School of Law, where he has taught since 1988. Judge Castillo received a BA degree from Loyola University Chicago, and a JD degree from Northwestern University School of Law, where he served on the editorial board of the Journal of Criminal Law and Criminology. Judge Castillo has been involved in the criminal justice system since 1978 when he was appointed as a deputy clerk for the criminal courts, a position he maintained throughout college and law school. In 1999, Judge Castillo was appointed and confirmed by the U.S. Senate to serve a four-year term on the United States Sentencing Commission, an independent seven-person commission which sets sentencing policy for all federal crimes.

Sandra S. Yamate is the CEO of the Institute for Inclusion in the Legal Profession, a not-for-profit organization dedicated to the creation of a more diverse and inclusive legal profession. She was the chief marketing and diversity officer for an electronic discovery company and spent the preceding ten years as the director of the American Bar Association’s Commission on Racial and Ethnic Diversity in the Profession. She was the first executive director of the Chicago Committee on Minorities in Large Law Firms. Prior to that, she was a litigator in Chicago for ten years. Outside the legal profession, Ms. Yamate is best known for her interest in multicultural children’s literature. She and her husband are the founders of Polychrome Publishing Corporation, the only company in the country dedicated to producing children’s books by and about Asian Americans. Ms. Yamate authored Polychrome’s first two books, Char Siu Bao Boy and Ashok By Any Other Name. Polychrome books have been described as exemplary examples of anti-bias children’s literature by Teaching Tolerance magazine, a publication of the Southern Poverty Law Institute, and are included in the Anti-Defamation League’s World of Difference Program bibliography of recommended children’s books. Ms. Yamate earned her AB in political science, cum laude, and history, magna cum laude, from the University of Illinois at Urbana–Champaign where she was elected to Phi Beta Kappa. She earned her JD from Harvard Law School.

Click Here to Reserve Your Individual Tickets or Tables Now