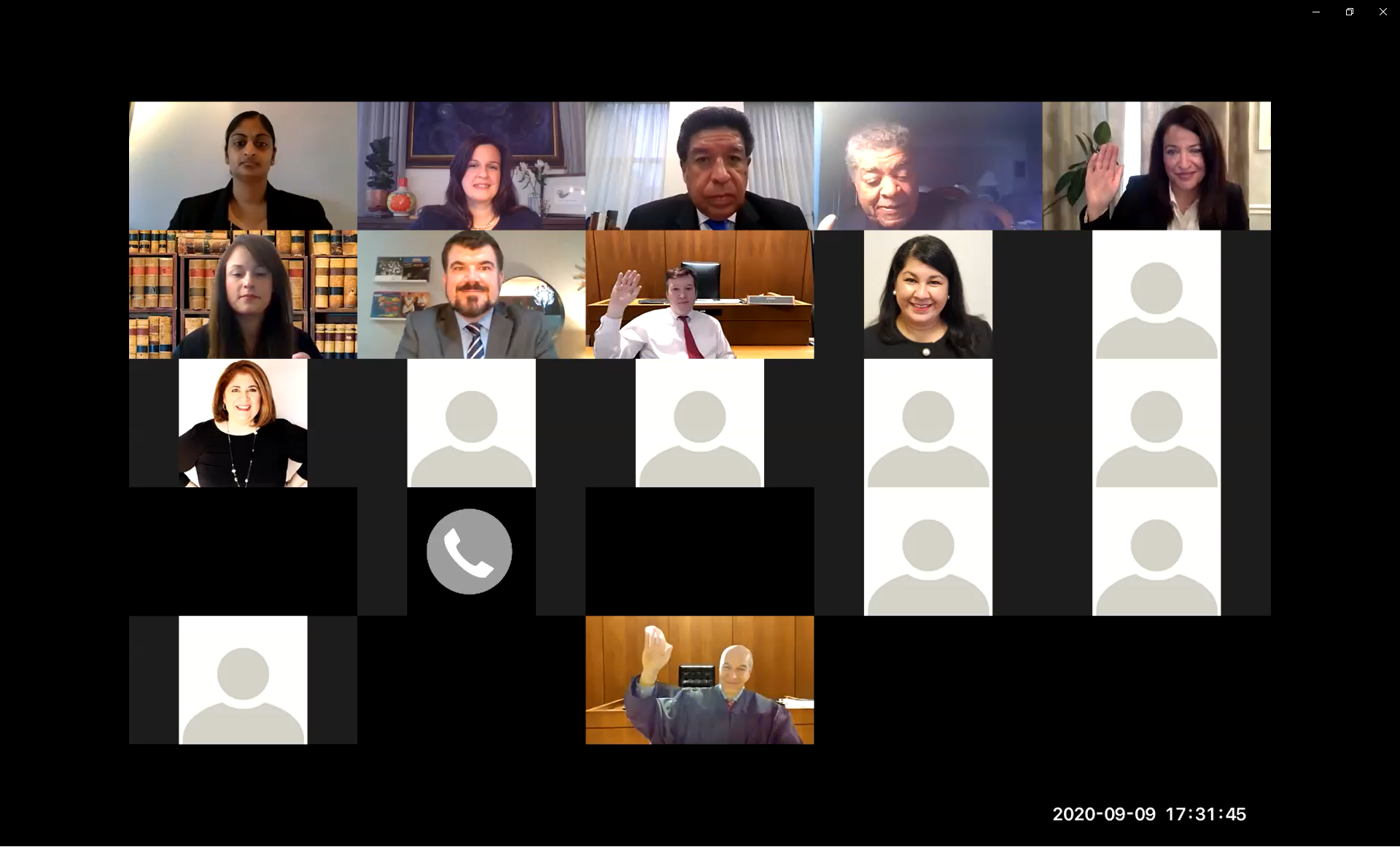 On September 9, 2020, the Diversity Scholarship Foundation was pleased to host its annual Judicial Recognition Reception virtually. The Foundation recognized Hon. Amee E. Alonso, Hon. Michael J. Hogan, Jr. and Hon. John A. Simon for their tireless work as DSF Committee Members promoting diversity over many years and celebrated their recent ascension to the bench.
Each judge was presented with a gavel in recognition of his and her work toward diversification of the law. Judges Alonso, Hogan, and Simon also took an oath administered by Chief Judge Timothy C. Evans of the Circuit Court of Cook County reaffirming their duties as judicial officers with the added pledges to continue to promote diversity and further unity among their colleagues on the bench in the spirit of friendship and cooperation. The honorees further pledged to promote and encourage diversity and inclusion in the legal profession and continue to serve the public to the best of their abilities.

Chief Judge Evans also presented the keynote address to a full house of attendees including presiding judges and judges throughout Cook County as well as attorneys and leaders in the legal community. The Chief Judge focused his remarks on the wide-ranging, positive effects of diversity in the field of law and the particular importance of open-mindedness and work toward inclusivity, not simply diversity, on the bench and in the legal community at large. Chief Judge Evans was also honored with a Spirit Award for his constant and demonstrated willingness to promote diversity in the legal profession and the community at large.

Justice Jesse G. Reyes of the First District Appellate Court was the master of ceremonies for the festivities. The planning committee was composed of Matthew Jannusch, Neha Tannan, Carol Sales, Abigail Sue, and Barbara N. Flores. The Foundation wishes to thank the committee members for their efforts, and the contributions by Chief Judge Evans and Presiding Judge E. Kenneth Wright, Jr. of the First Municipal District of the Circuit Court of Cook County in their remarks during the event.

Ultimately, the event could not have been a success without the presence of so many judges and lawyers who filled the chat room with words of congratulations for the honorees and others in attendance. The ambiance, while virtual, was convivial and conveyed a sense of unity and camaraderie inherent in all of the Foundation’s events. Judges and lawyers who were unable to attend due to other commitments nonetheless bought tickets, made donations, and promoted the event.

Thank you to all of those who attended, donated, and otherwise supported this evening’s event. All ticket sales and donations will fund the Foundation’s scholarships, which financially support bright, diverse students on their paths to a career in the law.